Giancarlo Talarico (MSc) investigates metabolic fuel selection in rainbow trout. He measures how lactate and fatty acid signaling affect the mobilization of carbohydrates and lipids, and he works in close collaboration with Jan Mennigen’s lab.

Elie Farhat (PhD 2021) has discovered that chronic hypoxia changes the lipid composition of membranes in 2 champions of hypoxia tolerance: the goldfish and the naked mole-rat. He is testing the idea that this membrane response is a new mechanism to promote deep metabolic suppression. Elie has collaborated with Matthew Pamenter’s lab for his studies of naked mole-rats. He presently works as a post-doctoral fellow at the University of Oslo where he continues to investigate mechanisms of hypoxia and anoxia tolerance in the laboratory of Sjannie Lefevre.

Mais Jubouri (MSc 2020) has quantified the effects of alanine on hepatic glucose production in rainbow trout. She has characterized molecular mechanisms involved in the regulation of glucose fluxes. Her work was co-supervised with Jan Mennigen.

Elisa Thoral (visiting PhD 2020) joined the lab to investigate how lactate signaling influences metabolic fuel selection in trout. She has now completed her doctorate at the Université Claude Bernard Lyon 1 and her visit to Canada was supported by a grant from the France Canada Research Fund.

Johnathon Forbes (MSc 2019) has investigated how insulin and glucagon regulate glucose metabolism in rainbow trout. He has demonstrated that insulin surprisingly reduces glucose disposal in trout. It is the opposite from the well known mammalian response and explains the glucose intolerance typical of salmonid fish.

Eric Turenne (MSc 2017) has quantified how Atlantic salmon and rainbow trout mobilize their lipid reserves to power swimming. He has documented the impressive exercise capacity of salmon by simulating long migrations in the lab. Eric is an avid sports fisherman and now works as a fisheries biologist for the environmental consulting firm AAE TECH SERVICES INC. in Manitoba.

Alyssa Gonzalez (PhD 2016) has investigated membrane physiology in fish and was the first to show that exposure to a common toxic chemical (PCB-153) causes the remodeling of membrane lipids. She now works for a writing agency specializing in biological and environmental topics for government and industry. She is also an avid aquarist and collects vintage action figures.

Teye Omlin (PhD 2015) has greatly improved the understanding of lactate metabolism in exercising and hypoxic rainbow trout. He was the first to characterize transmembrane lactate transporters (MCTs) in this important aquaculture species.

He was awarded his doctorate by The Right Honourable Michaëlle Jean and now works as an organ transplant specialist for Ontario Health – Trillium Gift of Life Network. 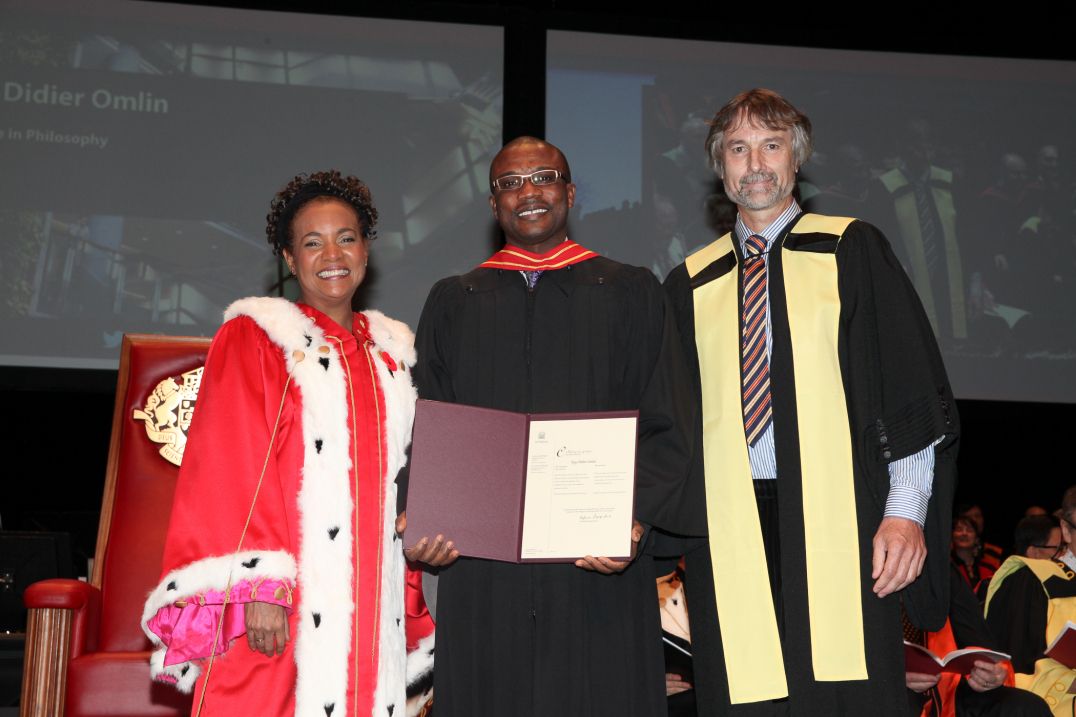 Enrique Rodriguez (MSc 2013) has shown that the metabolic capacity of orchid bees for aerobic exercise depends on the lipid composition of their flight muscles. His MSc thesis was co-supervised with Charles Darveau. After completing his PhD at Université du Québec à Rimouski, he presently works as a post-doctoral fellow at University College London on the role of mitochondrial physiology in the aging process.

Loïc Teulier (Post-doc 2012) made important advances in understanding the energetics of swimming fish and flying insects. Now faculty member in France, he leads a research lab at the Université Claude Bernard Lyon 1 where he continues to investigate the eco-physiology of metabolic fuel selection.

John Prindiville (MSc 2010) specialized in the effects of lipid-lowering drugs on lipoprotein metabolism of rainbow trout. He works as an Ecological Risk Assessor for the Canadian Ministry of Environment and Climate Change.

Eliana de Càssia Pinheiro (Post-doc 2009) worked on how Gemfibrozil affects lipid metabolism in birds. She then continued her career as a physiology professor at the University of Brasilia.

Simba Nagahuedi (MSc 2009) showed that the aerobic capacity of very sedentary birds can be greatly improved by eating long-chain omega 3 fatty acids. She is now a Senior Program Officer for the Natural Sciences and Engineering Research Council of Canada (NSERC).

Leonardo Magnoni (PhD 2008) characterized lipid kinetics in fish and discovered that salmonids use lipoproteins to shuttle energy from adipose reserves to working muscles during prolonged exercise. He is now a research scientist at the New Zealand Institute for Plant and Food Research Limited, where he works on fish growth and nutrition.

Shoshanah Jacobs (PhD 2008) worked on the ecophysiology of arctic birds. She was co-supervised with Tony Gaston (Carleton University) and is an Associate Professor in Integrative Biology at the University of Guelph.

Dominique Maillet (MSc 2006) investigated the physiology of long-distance migrant birds. She discovered that the semipalmated sandpiper eats large amounts of long-chain omega-3 fatty acids to boost its aerobic capacity before migrating non-stop from New Brunswick (Canada) to Northern Brazil: a form of “natural doping”. She is a Research and Innovation Development Officer for the Natural Sciences and Engineering Research Council of Canada (NSERC).

Eric Vaillancourt (MSc 2005) studied shivering thermogenesis and exercise metabolism in migrant birds. He is a toxicologist at Health Canada.

François Haman (PhD 2004) made important advances in the understanding of metabolic fuel selection of shivering humans. As full professor at the University of Ottawa, he runs a productive laboratory in the School of Human Kinetics where he continues to investigate the physiological responses of humans exposed to cold.

Taunya St. Pierre (MSc 2002) investigated the biomechanics of the human leg. She modeled the effects of joint angles on the length of muscles and was co-supervised with Gordon Robertson (School of Human Kinetics). Upon completion of her medical degree, she went on to work in a sports medicine center in Ottawa.

Christopher Guglielmo (Post-doc 2001) worked on lipid metabolism in long-distance migrant birds. He is a full professor in the biology department of Western University where he continues to lead a research lab specialized in the eco-physiology of bird and bat migration.

Shannon Reidy (PhD 2000) examined the physiological effects of prolonged fasting on woodchucks and rabbits. She discovered novel effects of mammalian leptin on the regulation of lipid stores. She now lives in Nova Scotia.

Deena Shanghavi (MSc 1999) worked on the effects of swimming and catecholamines on hepatic glucose production in rainbow trout.

Servane Bernard (MSc 1997) investigated how rainbow trout mobilize lipid reserves to provide fuel to working muscles during prolonged swimming. She then completed a PhD on king penguin metabolism in Strasbourg (CNRS) and is a nutritionist in the Bordeaux area.